Graeme died in 1995 and these editions are done with the full permission of his widow Gill Del-Mace.
Gill has signed the editions for Graeme. Graeme Roche was an exciting and innovative artist of unique quality. The iconography of the work affirmed his Australian heritage.

Born in Melbourne in 1944, his wide experience of life included training as an air pilot and a chef. In fact he worked at the Balzac Restaurant in Melbourne, as did Charles Blackman some years earlier. After moving to Queensland in the early seventies, Graeme developed a strong interest in painting and soon displayed a talent that enabled him to work as an artist of considerable repute.

In 1980’s visits to Europe broadened his artistic experience and revived his keen interest in food and red wine. This led to Graeme moving back to Melbourne.

He was fascinated with the dramatic effect of light and mood on otherwise ordinary and familiar objects, creating evocative and enigmatic images in the surreal tradition.

Graeme was married to Gill Del-Mace and our editions of Graeme’s work are done with her full permission. These editions are estate editions and Gill has signed for Graeme.

Roche’s works are in major corporate and private collections both in Australia and overseas.

We found some notes from Graeme in one of his exhibition catalogues.

As I see it: by Graeme Roche

“There are two subjects on which more nonsense has been written than any others; Painting and wine. I do not want to add to the mystifying words which already exist, I would like only to state how I see things.

The classical simplicity of my work does not always expose the quest for balance. People like the clean image. It pleases me the struggle does not show. A painting can take months and during that time change dramatically. A painting may reveal many faces during its development.

I can say what the original idea is, the foundation so to speak, but never what the finished painting will be. Most paintings are a long day’s journey into the night. I believe in carefully thought out composition, not personal screams or testaments, I am not trying to teach anyone anything. Hopefully people will enjoy my interpretation of what is there already.

As Picasso observed, ‘I don’t search I find’.

My approach is classicist, my divisions of space perfect. Quote TS Elliot: ‘The stillness as a Chinese jar still moves perpetually in its stillness’.

I draw inspiration from everyday situations often portrayed slightly out of context… reality juxtaposed. I share this fascination with Smart, Delvaux and Magritte, ‘Inanimate objects live’.

Surrealism is one of the important and ongoing Art movements of this century.”

The writings of TS Elliot have also been a great source of inspiration. Four Quartets, Little Gidding:

‘We shall not cease from exploration

And the end of all our exploring

Will be to arrive where we started

And know the place for the first time.’ 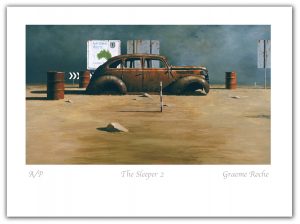 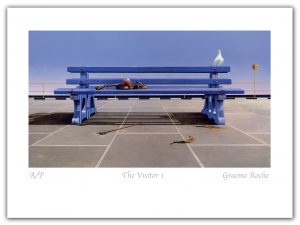 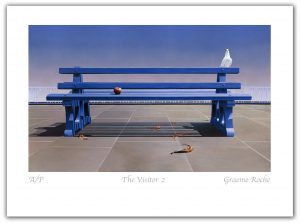 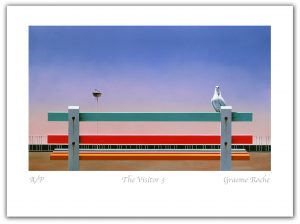