Cathy Webster CPF (Certified Picture Framer) has recently achieved a significant placing in the Professional Picture Framers Association’s (PPFA) framing competition held in Las Vegas, USA.  This prestigious competition is ranked as one of the best in the world and to achieve second place in a field which boasts some of the best framing designers in the world is no mean achievement.  Not only is judging based on design but the materials used and the attachments used must meet strict preservation framing requirements.  The theme for this year’s competition was ‘Grandma’s Buttons’ and contestants had to frame seven buttons which had to look like buttons from the past.

The international Professional Picture Framers Association (PPFA) also honoured custom picture framer Quentin Webster, MCPF, during the PPFA 2017 Convention. Each year, the PPFA Awards Committee, in conjunction with the PPFA Board of Directors considers nominees for special awards for association members whose past actions, deeds and vision have greatly strengthened the art and framing industry. Webster, a Master Certified Picture Framer (MCPF), was honoured as PPFA Chapter Volunteer of the Year, an award that recognizes a Chapter leader and/or member who significantly contributes to their Association. Taken into consideration is involvement in chapter and national activities, creative events, and personal commitment.

Congratulations to both Cathy and Quentin! 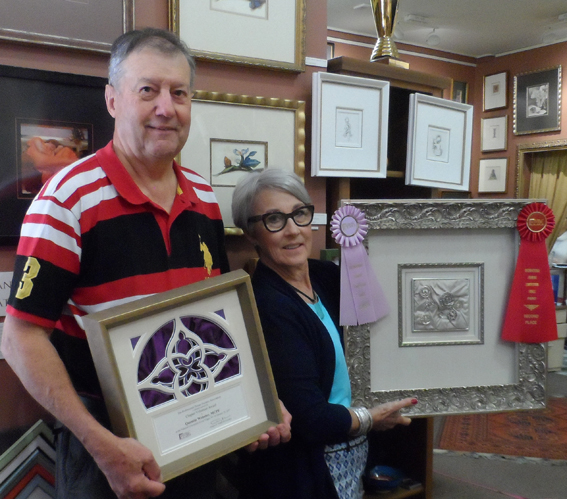